A rare outing of the SQuidgey variety 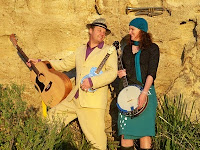 My apologies. I have very little time to write my thoughts – even though I enjoy it. Currently on my way to Melbourne to celebrate Ruby's 16th birthday – wacko! (Just banking now over the top of Wollongong. Actually. No. I wrote this a week ago! So don't try and figure out a calendared reality from this burbling).

Had a fabulous night last night. Jane & I put up Rose Turtle Ertler – a great Australian ukulele troubadour. Her originals are quirky, anything but cliched and her ukulele playing is very wonderful, in particular her strumming and chord progressions. The workshop was very well attended prior to the concert, with most of the 20 or so people coming from the local ukestras. Two additional people came who found out through other means.

Jane & I performed in our SQuidge format – we focussed on uke songs – people whinged when I brought out the guitar! Bloody ukulele police! ( ;-) ). Jane gets rather annoyed with me as I am not too diligent a rehearser. You could tell as some of my ukulele 'solos' (which I am not accustomed to doing) left a lot to be desired! I show far more skill and 'eptness' (as opposed to 'ineptitude') on the trumpet – and that really shows. People invariably compliment me on my trumpet playing after gigs.

Jane didn't sing in the first song (Fake Plastic Trees by Radiohead) where she should have because she was nervous. I am glad she is mostly over those nervous attacks! It is so much easier in The Do Riders where there are others to cover your mistakes (and more competent people like Mick to take the solos!). But we both soooo enjoyed the intimacy of the duo performance. And people really seemed to appreciate it. I even heard some oooohs and ahhhs in some of our more sensitive stuff (such as Into My Arms by Nick Cave). I love harmonising with Jane, and the baritone and tenor ukuleles just suit each other so well in the quiet sensitive songs so nicely. You don't have to overplay – minimalism is quite sufficient to get across the mood. Our baritone / tenor uke version of 'Do Right' was sublime (imho).

Look carefully at those last two sentences. See the second one is slightly longer? Sentence #2 has an 'Oxford Comma'.

I say this because the Do Riders are bedding down rather well. We have scored several gigs at the Five Islands Recreation Club in their 'A touch of country' slot. It is an old RSL (at Lake Macquarie) that is working at staying alive. Hopefully we can help them in their goal.

Anyways – at our first gig there a YP (that's 'young person' – someone younger than, say, 35!) suggested that we try and blurgrass 'Oxford Comma' by Vampire Weekend. They were a headline band at Groovin' the Moo which my 15 year old daughter went to this year – so they must be very groovy and current.

We are recording a demo this week. 3 originals (Midnight Train by Nikki, Dead Guy (an old voicepopfoible song) and Beach Pockets by myself; and 2 covers (Creep by Radiohead & Love Cats by The Cure). We need stuff for putting into festivals etc., although the website is working very well for us in terms of publicity and providing video evidence of our competence!

I shall speak soon on the topics of ukestras – just to keep you (whoever 'you' are!) up to date.

And an Oxford Comma? It is the rather indecisive and controversial placement of the comma after the word 'Jane'. Who says the Do Riders are not hip and political!!?
Posted by thesumoftheparts at 1:48 PM No comments: