Before and After, all at the same time. 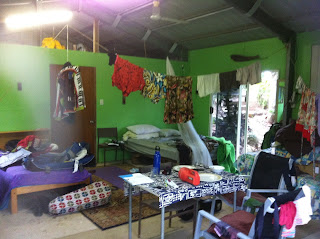 Jane is meditating on the shed floor – our excellent one star Airbnb Mission Beach accommodation. I am ticka ticking on the puter on the bed, (thanks Cynthia for the fandom prompt). The bright green stinging ants are crawling across the underpants drying on the passionfruit vine. Anywhere can be home.

Anywhere except a crowded performers camping area where we lie, tent by tent, snoring sinus by farting anus, too close for comfort for a good 3 night's sleep.

Walking out of Townsville airport without being frisked by customs or border security seemed very odd, because, good lord, FNQ feels like another country - climate, culture n all. The Norrrrthhhh Queeeenslaaaaander taaaaxi driiiiiver was barely legible, relaying mumbled stories from the Townsville Bulletin about pissed off customers suing venues for delivering only 3 minutes of a scheduled 5 minute lapdance. Yes, this is civilisation Dorothy, but not as we know, not as we know it.

Our home for Thursday night is a beautiful Queenslander, our bedroom has louvres, not windows. Our hosts, Anu and Lawrie, have a verdant garden midst the sterile South Townsville blocks of people who care not for greenerie. The tide rises twice a year on their block, through the drains.

But, as old Abbottophile uni and school buddies remind me in barbed Facebook exchanges, there is no such thing as climate change.

People still remember me from 8 years ago, one of voicepopfoible's last gigs. “You guys were great! I remember that last gig! Dunno why you ever broke up!”. Well...time, and tide, waits for no man.

And it was 'manny' in 2007 during the infamous Pasha Bulker weekend, me and Ruby safely ensconced 2000km from the floods that stole our car from Daughter #1 and her Mother. Palm Creek 2007 was us four blokes (and a 12 year old daughter) just talking shit together, giving each other shit, getting shitfaced (except me n Ruby) on a blokes' weekend away. Goddam fun.

But I remember I slept ok back then. 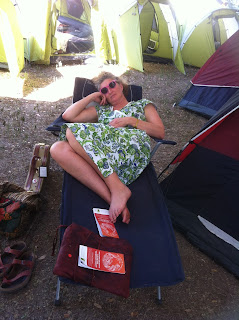 This time Palm Creek is with the woman with whom I love and work. We are a great team. She is my protector. A man needs a good protecting woman, particularly when she fiercely defends her right to sleep. Because the voicepopfoible of this festival are nine blokes, horn players no less, from Brisbane band Bullhorn. They are here for a good time, drinking piss from lunchtime, performing at midnight, then coming home to party. But not on my sleep time! thinks Jane who roars at them from bed at 1:30am. Someone mumbles 'good call', and they guiltily shuffle off to bed, only to make matters worse by sleeping in the tent next to us, drunken snores keeping me further awake.

But their performance was excellent, at least on the first night from the 'comfort' of my bed. I could swear it was a precise fender jazz bass holding and pumping those rhythms. But no. It was and is a sousaphone, an instrument that you climb inside to play. The main stage is 400 metres away, but I swear the bedding and dust is lifting with every bass drum / sousa hit and trumpet/trombone swathe of air cutting through our tent. They sound brilliant. Must go to the concert tomorrow night (at a much more agreeable hour of 10:30pm).

The next night's attendance at said concert leaves me gasping with admiration. A two trumpet, two trombone, two sax (one a very rare bass saxophone), drumkit, sousa, all topped with an overweight big brown man, beating his chest with passion and belief, and in command of an audience eating out of his congenial MCing hands. I have not been so impressed by a band (and never by 'rap') in many years, and I fight it out at the front for dancing space. I jump with the dust-clad masses as we all give our sinuses a self-inflicted battering. 4 days later my face is still swollen as it tries to clear the drought-dust from inside the cavities of my cheeks, nose and eyes. Bullhorn are da shit man, sinuses or no.

That night, I sneak out of the tent to find a homelessness shelter somewhere on site, somewhere quiet to sleep that is not an airbed or surrounded by snorers. At 2am I claim a lost mattress in a rat frequented shed. Ahhhhhh....sleep....rats or not rats. At dawn the mosquitoes carry me back to Jane and I nap some more.

Our brief at Palm Creek is to teach ukulele. We don't teach ukulele. We ukestrate ukulele, create a ukestra, then provide a performance space for the result. But we do have beginners, and seem, miraculously, to be able to cater for them at the same time as the ones who are seeking a challenge. Most people can play, we have a few teenagers, and numerous baby boomers. It is gratifying that it worked out, because the program really didn't give much indication of what was gunna happen. They bill me (Mark Jackson) as the act, and not Jane, and there is no overt link with the ukestra. And then the 9:15 time slot (am) (for the 'ukestra rehearsal), is written in a small and obscure part of the program. By small, I probably mean 6 point font. So it meant we felt a bit apprehensive about whether people would come.

But they did. 40-50 each day, including two Ukastle Ukestra Alumni who either happened to be up this way, or who now live in the area. The raves and complaints, as usual, were superlative. Never done anything like this. My local group is so boring, this is wonderful. I learned so much. And lots of laughter. Our teaching personalities tends to amplify our character traits. Me the disorganised shambolic and funny one, Jane the organised disciplinarian who laughs readily.

My favourite person was Amber, a girl of 11 (nearly 12) who was very studious, serious and reliable about the tasks at hand. In contrast was Emily, maybe 10/11 years old, who wanted to be the lead singer, but didn't have the voice for it, and who, when we shifted the spotlight from her, just up and left. Too hard, she said. I think what she meant was 'too hard on my ego, I didn't get it straightaway, or wasn't able to be the star immediately, so I'm not going to try anymore'.

Amber was so much more pleasant and real.

Monday it was raining (praise be!! The dust is gone! Bring on the mud! Or get us outta here). We gather at 11am for a final rehearsal to ready ourselves for the performance on the main stage. The organisers' intent for the Performers Camping and socialising area comes off for us. We purloin the legendary Mal Webb and his wonderful accompanist, Kylie Morrigan, as our erstwhile Gotye and

We also do a set as Jack n Jel. The audience vote (yet again) indicates that they don't like our new name. They didn't like SQuidge – so what are we supposed to do for a name? We purloin Lawrie, bass player/godfather of festival / enlightened motor cycle mechanic / Radio National carpenter. He helps us along. We wander through the set, acquitting ourselves rather nicely and depart. On our way out people are stopping us saying how much they enjoyed it. Really? Why? You are funny. I never knew whether you were serious or whether some of that shit was made up, real or not. Woteva. Must work on the new bio...I hate bios. I hate referencing Mark Jackson in the third person. We all know he's a twat.

A toast to a good festival and goodbyes

And so we leave, the bus taking us to the airport. Alan, the bus driver, is breath tested on site before being allowed to leave. The cops are INSIDE the festival gates, which only seems right and proper.

This festival has been so different to those 2 or 3000km further south. For one, there were no Morris Dancers. Two, grog is wandering in hands everywhere. Smoking is banned on site, but no-one takes any notice. Down in the more civilised lands of New South Victoria, we know that we only drink back at the campsite, or in the licenced fenced off areas of festivals. Here, beer, wine and the essential stubby holder is everywhere.

Over the weekend I am offered such fine hospitality at various campsites, including one where I secure a pina colada and a nice biscuit. I politely and wisely decline the biscuit.

It's been a great festival.
Posted by thesumoftheparts at 4:42 AM No comments: