The Safari Suit - a story of Community

A bit like Bruce Wayne and the Boy Wonder, at festivals they never quite know who we are or what to call us.

Mark and Jane? Jack n Jel? Ukestra? The Sum of the Parts? One Song Sing? Batman or Dick Grayson?

In the dog eat cat world of social media marketing we are the ukulele equivalent of that classic, and awfully unhealthy, Australian dessert. Trifle is made up of bits of sweet stuff, but you just can't put your finger on what makes it really good. Same goes for Jack n Jel.

Actually, we always know who we are, but Festival marketing people always seem to be in a quandary. And people walk up to Jane and call her Jill (an easy mistake – she is the 'Jill' part of the Jack n' Jel).  It Is our own fault, but I guess that can be expected when setting up a genuine-on-the-ground community music business. Are you a business or not? Why yes we are! We are called ... no ….  it’s called …. um, we call that thing ….  ah damn it. It’s community. It’s music. We make a living. Let’s call it quits.

In fact we are calling it quits for our hitherto annual North American jaunt. This is our 9th and our last. Hopefully it won’t be a ‘Johnny Farnham last’ (don’t worry, Australian readers will understand that reference).

Truth is we sorta can no longer reconcile this global gallivant whilst staring down the barrel of climate change. Something’s gotta give, and that something someone somewhere starts with us staying at home. It’s a nice enough place. Good people, beautiful spot, fresh fruit and veges. What more could a human want?

Enough of that. It’s too sad. Too real. Let’s talk about something else. Like this suit. 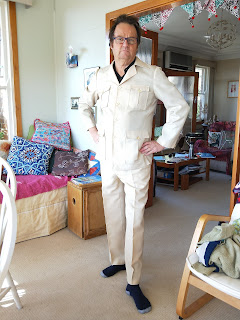 The identity of the Safari Suit

This suit is my dress suit, all festival-pressed-ready for a series of festivals in Canada. The fashion is quintessential southern hemisphere 1970s colonial – the safari suit. It’s a laugh, but a laugh with a good story.

This safari suit is a special one. Very special, for it travelled through the fires and laundry presses of 1970s indigenous Australian politics.

Marion is one of my delightful ukestans at Port Stephens, a woman of, with, and within a lifetime commitment to community, health and social justice. She leapt into ukulele after her husband, Les, passed away.

But Les was not just Les. Les was Les Johnson, Minister for Aboriginal Affairs in the 1970s Whitlam Government. Les, like Gough, was a legend. In three turbulent years, Gough Whitlam and his team of merry madmen and women transformed Australia from a fusty 1950s dream, and thrust us on various paths of modernisation for our culture and our economy.

The iconic representative moment for Australia’s Indigenous people was when Gough passed ‘a handful of sand’ through Vincent Lingiari’s hands, symbolically returning the land to its original, more gentle, and less avaricious owners.

Marion gave me this suit. It was Les’s. I like to think it was there. At that very moment this suit soaked up the Whitlam Government's message of justice, diversity and respect. 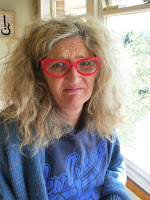 I love it. And I trust the Canadians will also enjoy it. But unfortunately Jane just can’t seem to get beyond the bad out of date fawn fashion disaster that it no doubt is in 2019. My hope is that the story helps to redeem its apparently execrable fashion qualities.
Posted by thesumoftheparts at 12:28 PM 1 comment: