Trying it on - a slide night

In the 1960s and early 70s, my Dad would occasionally turn off the telly, turn out the lounge-room lights, set up the screen, and show us slides from his trips to New Guinea, or old ones of the bay. I longed for these (and still do). Dad would pepper the event with his own annotations, fuelled by reverie and perhaps a beer or two.

In contemporary times such things are now mostly non-events, happening in the privacy of our Facebook feed, or in fleeting, sharing and caring palm-to-face mobile device moves.

We've just left Lark Camp for 2015. Last year I wrote lengthily about my freshman experience. If you haven't read it, I would encourage you to. It gives a blow-by-blow account as seen through the eyes of a novitiate. In 2015, as a more accepted part of the Lark family, I now lack the dispassionate external eye necessary for such reflections, and besides, this year I was probably too immersed to have time for in-camp screen time.

Except for the first bit, some small thoughts from my first days of 2015 Lark Camp. The remainder is more like Dad's 1960s slideshow. (Did you know you can click on the photos to make them bigger?)


A few words, but not many

Is it possible to become accustomed to the pace?
Then dancing, dancing, dancing, with the one with whom I vertically express my unconsummated horizontal intentions.
As with last year the question remains - can I keep up this monotonous pace for seven straight days? Right now, at the dawn of Day Three, the task seems daunting.

On Day Seven I'll have tears.


The Slide Show by me (Frank's son) 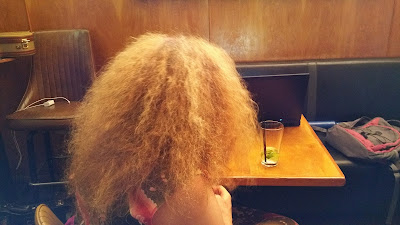 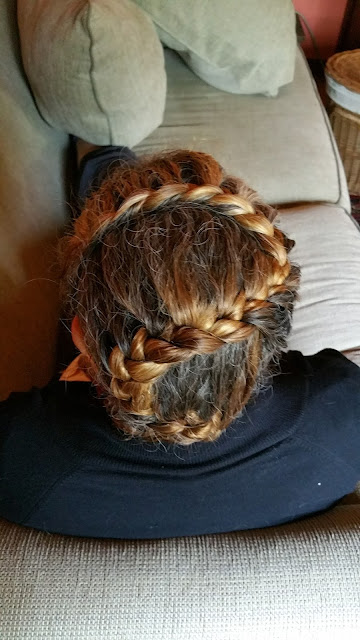 Our pile – ready for the pickup from our Sonoma County compatriots, driving in a four car caravan (convoy). Lark is about a 20 minute drive from Mary-Jane n Jovan's in Mendocino. The boys from my old band (voicepopfoible) would recognise this pile. 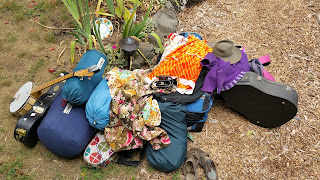 Comrades from Sonoma County
The music starts in the queue. Janeen (in red top) is the most volcanically delightful female dancer at Lark. I enjoyed our dancing last year. I enjoyed my brief dances this year. Chris, in the leather jacket is a baritone sax player. They didn't like me saying sax-off-on-ist. Americans prefer sax-off-phonist. It sounds less lascivious. He makes industrial food manufacturing equipment. An occupation definitely not as lascivious as that of a saxophonist. Speaking of lascivious. Steve on the right there is a university professor specialising in statistics and sex and something else. Why is it not surprising that I don't remember his third speciality? Phil, on guitar is already recalling his complex choro lines from last year. The music has begun, and we haven't even got through border security. 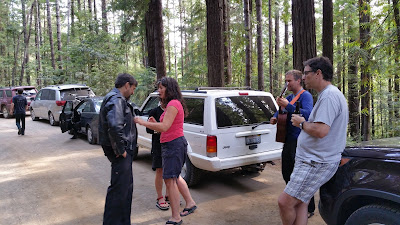 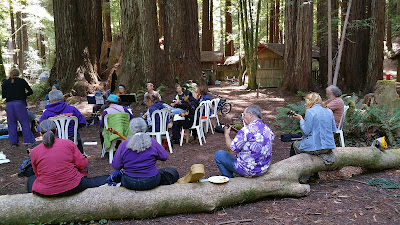 Our reputation clearly had preceded us from 2014, as the ukestra class size doubled. I took the first class, Jane the other. An hour and fifteen minutes each. 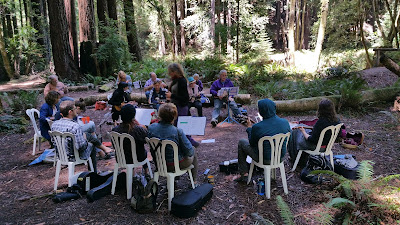 Each day, for seven days, at 11am and 12:30pm, we had ukestra sessions. It only mizzled one day (wet air), so it wasn't an issue being outside. Finding eough chairs was sometimes an issue! 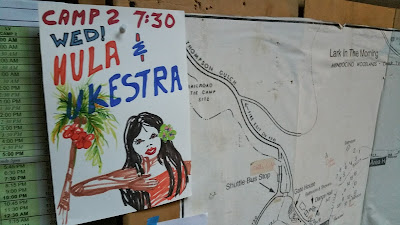 Scheduling performances was a small challenge, but thanks to the hula teacher, we had ours scheduled in the Camp Two Dining Hall for the Wednesday. This gave us five days to develop some skills amongst our participants, and to arrange them. Unfortunately we missed out on getting one of these posters, but they were so beautiful.


All of our hard work eventually paid off, complemented beautifully by Jerry and Adrienne, two of Lark Camp's most accomplished dancers. They did the Tango to our Libertango. We were so thrilled and proud to have our work on Libertango come to fruition. It does work! For both beginners and for more experienced players! This is the motley crew who showed up. 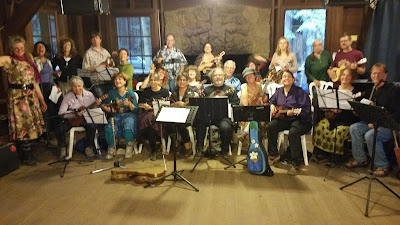 But to see how they played, watch the video. The dance is so beautiful, and the accompanying music ain't too bad for five days of pulling it together!

We performed 3 songs - Budapest, Libertango, and this one - Purcell Canon.

Ain't it a cute little hut in the forest? Actually, that's the dunny (Australian for 'restroom'). 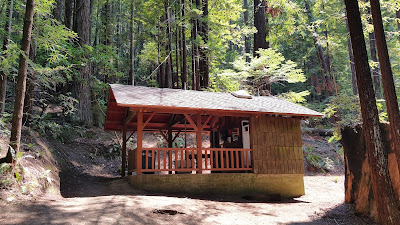 Our cabin (number 32 - same as last year) is a 5 minute walk from the main action at Camp Two. I am grateful for the distance as the midnight dances are very noisy and youthfully exuberant. It is also right on the creek. So we hear a bit of babble from the brook, footsteps on the footbridge, and we get some sunlight because of the cleft in the forest made by the creek. Windows made of wire. Door made of creak (note to self - take WD-40 next time). 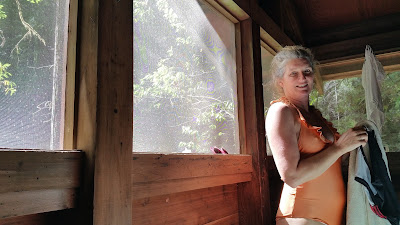 The Bobbsey twins wanted me to take a photo of them wearing the same top. Marty on the right is one of the Camp Two 'mother hens'. Need to know something? Ask Marty. 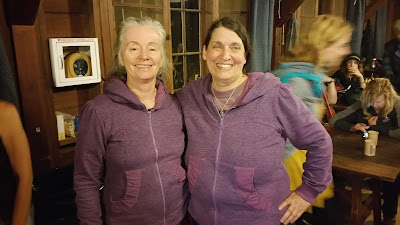 Huck's homeless euphonium, reflecting the red striped tent. The player never picked it up. He got shanghaied into being the piano player for the swing band. There are instruments everywhere around camp. Left, happy, ready, safe. 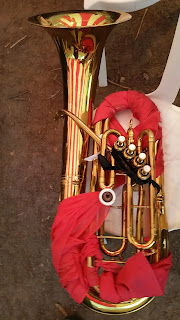 A nearby fiddler. She has a gorgeous sense of self, sun, hair and cooler-covering tablecloths. 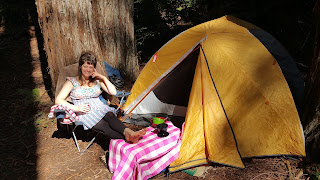 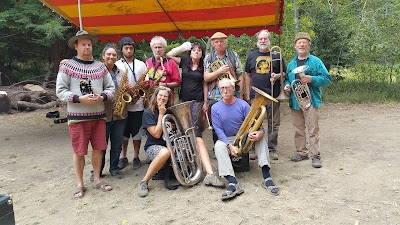 At the very last minute on the last day, I joined the Scow (the garbage truck) as it ferried trashie musicians to Greg Moore's 'World Band' in the meadow.  Fantastic stuff that reminded me of revolutionary brass band music. Not innovative, but revolutionary. I'll be doing that next year definitely.


Lark is not a performance festival as such. You do not go there to 'see' things or performers. You got there to be a part of it. To play music. To live differently for a week. That being said, my favourite spot for 'performances' was around our Camp Two Campfire at 7:30am. I sang quite a bit there, and was appreciated. At Lark I particularly appreciated Mr Erik Hoffman, an intriguing and attractive fellow of good pacifist stock. Erik is the dance caller par excellence. He also sings a rather pleasant song around the campfire in the morning. He is also known for wearing dressing gowns in public rather stylishly. A bit like Caesar. 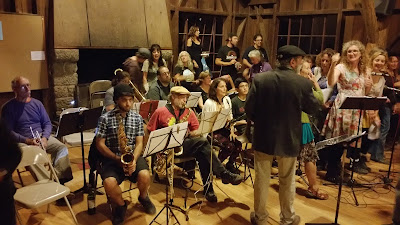 Somebody took a leadership role in the Latin Band with the singers section. 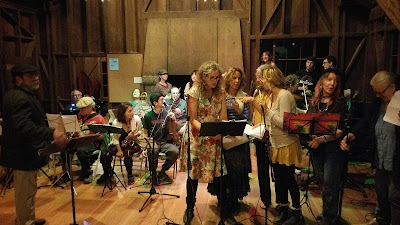 Jane rewrote the rap lyrics to Mambo #5, and herded the cats into some form of discipline. She knows how to do it. She's been doing that with me and other Novocastrian ukulele reprobates for 5 years now. 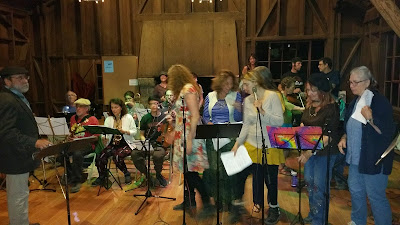 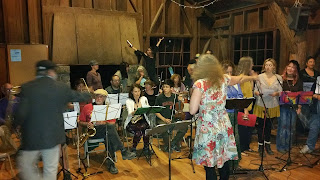 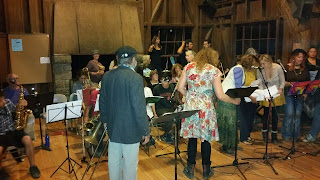 The difference between the Australian and American folk scenes? In Australia we have specialists in Mexican music. In the USA they are specialists in the music of specific states of Mexico. Nydia lead a South American session, behind her is a woman playing guittaron (a bass instrument). Nydia's child, Yasmin (age 6), spoke to me on the bus, affectionately called Camp Four, and usually with much music, reverie and singing aboard, runs perpetually between Camps 1 and 2 (through Camp 3). She asked me why I didn't speak the same language as her. I had to explain it was still English, just a different accent. 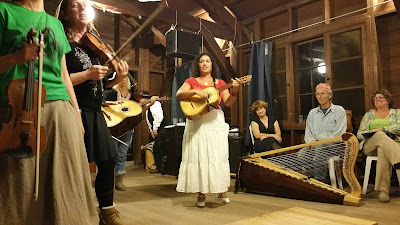 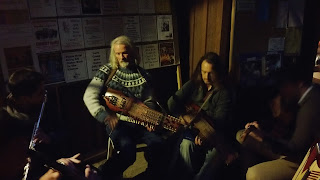 This one and a half minute video is of a night walk from the bridge (across what I call the Gaita Gulch) to the hall at Camp Two. The first lights are wrapped around the bridge railing, then it is a wee piano accordion rehearsal in a van. In the distance, and dominating the night soundscape is a pan-pipe group, but not before a gypsy jazz accordion/hurdy gurdy jam. The pan-pipe group process into the dining/dance hall.

Balkan dancing in the hall at Camp One. Jane is in a pink hat amidst the blurred frenzy. This was Jane's favourite dance. 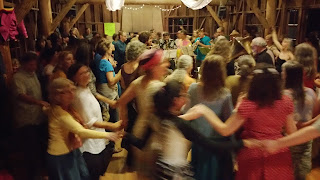 Eden Macadam Somer is a Boston Professor (which means 'lecturer' in American). Watch her feet in the first 15 seconds.Thrilling and beautiful stuff. Eden and Larry performed in the Camp Two dance hall one night after dinner. I met Larry in Camp Four (the bus). We had a damn fine chat. Larry is originally from the wastelands of Detroit.

And so. Next year? One suspects so. So many good people to share music with, and not that many active years left on the planet (?optimistically, maybe 50). May music whilst the sun shines.

Thanks Lark, you make music so much fun. And life so meaningful.
Posted by thesumoftheparts at 1:32 AM 4 comments: