Six weeks ago 83 year old Ted was still playing ukulele in the LakeMacUkestra. Six months ago he was hauling my PA in for the Tuesday evening group: every week, sometimes twice a week.

Jane n I sang today at Ted's funeral, “I'll see you in my dreams”, the song Joe Brown sang at The Concert for George. A small group of ukestrans then sang and strummed his coffin and cortege away – to the tune of “Don't Sing Aloha When I Go”. Ted was an everlasting ox - until one of those diseases that are meant to get you, got him.

Three reasons make my work worthwhile - Music, Community, and It's a Living. These pillars formed the backbone of my TEDxNewy talk, back in 2010.

It is #2 which underpins this Ted talk.

Ted and Betty came along in the first few weeks of 2010, just after the ukulele group had started. Since then they have rarely missed a Tuesday night. They performed at all the local festivals; took their motor home to festivals further away, except Hawai'i - you can't take a motor home to Hawai'i. But they went anyway, performed for ten minutes in the 2011 Hawai'i Ukulele Festival with 20 or so fellow Ukestrans, then went off on a ten day cruise around the islands. How I so love these tales, tales of people in their 80s being able to tell fresh stories of their active lives. Much better than watching the telly.
Ted made our first Ukastle Ukestra sign. He made, and sold, ukulele holders that attached onto music stands. Our greatest difficulty on Tuesday nights was drink spillage. So Ted invented a drink holder. I think sales of them funded a few beers for Ted.

I only visited their house for the first time the other day. We had scheduled to visit Ted n Betty Saturday afternoon, knowing that Ted wasn't at all well. But we got a call just before we were about to visit - Ted had passed away that morning. Nevertheless, we kept to our plans as we heard Betty was there. Susie, another Ukestran, was there for much of the day as the family still had to arrive.

We banged on all the doors, but deaf-as-a-post-Betty couldn't hear inside her darkened house, hermetically sealed from the traffic noise of the main road. We could see her fussing about, through the windows. Eventually she saw us. 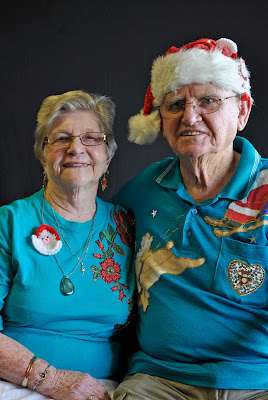 About four walls were dedicated to the productive and reproductive life of Betty n Ted. Beautiful photos, and portraiture shots that everyone has. Though not everyone has a wall dedicated to your 60th wedding anniversary - official Congratulations letters from Betty Windsor, Barry O'Farrell, Quentin Bryce, Julia Gillard, etc., etc. You can't really lie about your age when you have that sort of thing on your wall!

But one thing really struck me as Ted's essential legacy - the floor. The lounge room floor is a beautiful sprung wooden dance floor, because 'the dance group needed one when the hall down the road closed'. In the corner, the familiar bags, instruments and detritus of any ukulele player.

Ted n Betty are testament to the benefits of a life lived actively and socially, creating and participating in community wherever they go. As a couple they were inseparable, but all of us need more than just the each other of any dynamic duo. We need broader community – the richness within which we swim, the safety net when we, or our partner, falls. 'Families' and 'economies' may be the lexical currency of elections; 'community' not so much. No government creates that for us. 'We' create 'community' ourselves, through dancing, music, children, school, tree planting, drinking, sport, work - through the myriad activities we do every day, morning, evening, afternoon or weekend – usually in an unpaid capacity.

In their life Ted n Betty, like most of us, had children and school, but I'm sure it was the dancing and music that sustained them most in their latter years. For three or more decades they were the backbone of the 'Rainbow Room' – a community of people who shared a love of dancing and concerts every Saturday night. Only in the last 3-4 years had they switched their focus to the ukulele. So we were privileged to have them. The dynamic duo sang 'Boots are made for walking' on microphone, and would argue about who it was who came in at the wrong time. This little clip shows Ted's care for everyone, and for every step he took, but it also speaks volumes of the loving relationship that he and Betty have.

At the funeral his son spoke of Ted's recent love of the ukulele. Gary said that of all the stories of the Ted n Betty travels that they would tell, the trip to Hawai'i was the one Ted loved the most. This reflects what I really value about our work. That people, even in their twilight years, can create new stories to tell loved ones or to share with a drinking buddy.

Surely the richness of our lives is measured in the stories we tell, and it is up to us to enthusiastically participate in life enough that we do actively continue to create our own stories. By his own account I think that Ted, the 83 year old concrete batcher / truck driver, had a very rich life indeed.


Posted by thesumoftheparts at 7:58 PM