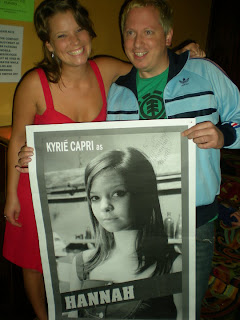 Good morning. The only time I seem to find for doing this is during occasional moments of 3/4am insomnia.

The beginning of the 3 weeks was holidaying with Ruby. Treachery Head proved its name correct and destroyed the camper trailer. Cables broke. This is the main accommodation device for festivals, so that was a blow. Thanks to Stan (distant-father-in-law twice removed of ex sister in law type) we fixed that and I was then able to move onto the National Folk Festival with Jane.

The National is and should be an annual pilgrimage. It is how life should be lived, without nuclear weapons and with lots of music, good food (well...ok...healthy....fastish food), dancing in the streets and diversity. I was not accepted to play this year, so at the urging of Jane, and at the last minute I applied to be a volunteer. Came up with 'stewarding' which wouldn't be my preference (mc'ing, stage managing yes, stewarding - no). It involved five 4 hour shifts on a twentyfour hour roster, two of them at 4am. Turned out to be interesting and vaguely fun.

I workshopped a lot, enjoying Kristina Olsen's 'playing lead guitar for dummies', Frank Jones' 'how to steal a song', and Ben Stephenson's awesome DADGAD / Irish guitar workshop. And the Kwela stuff with Andy Rigby was fun, as always. I learned a lot, did some choir type workshops and came home to do the uke Tuesdays.

Both the LakeMacUkestra and the Ukastle Ukestra are doing quite well and evolving at different paces. I also now have approval from the Fingal Bay Sports Club to try out a Port Stephens Ukestra (Ukestra Port Stephens? Ups?). Heaven's waiting room can have a ukestra as well I reckon. Will try and get PR happening v. soon. The Bay is where I grew up each and every weekend. So it is a vaguely attractive idea to head there once a week and to see if I can bring more uke joy to the lots of retirees who seem to hold the fort up there.

THEN. I bolted off to Melbourne. Saw Kyrie's premiere of her first feature film, a rather B-D grade horror slasher film called El Monstro Del Mar. She is the nice girl, Hannah. As it should be for my daughter. My youngest (Ruby) was also in it, as a school bus extra (which is a rather accurate reflection!).

But the PD continued in Melbourne, seeing some very old friends who are community musician types, talking and playing endlessly about how to bring music to the people. Peda & Ruth in Inverloch are very very inspiring, as are the Strating twins and Lyndal and Strat. Thanks so much to all of them for helping me with resources and thinking and music.

That should do for now. I hope it ain't so long to the next post, and that the next one is more reflective.
Posted by thesumoftheparts at 11:34 AM